From www.Margaritaville.tv: Well, live touring may be temporarily paused, but we’re all still in need of some fun as we all do our part to maintain social distance! Starting this Wednesday at 8PM Eastern/7PM Central (with an encore at 8PM Pacific) when we will be re-broadcasting a show from the archives “live” like we would from a night on the tour!

Check out the full schedule at link below
https://www.margaritaville.tv/cabin-fever-2020

Jimmy Buffett stopped by the new Radio Margaritaville studio in Nashville yesterday and talked about his new album with Jasmine.

Watch Jimmy Buffett and the Coral Reefer Band’s Millennium Show from back on 12/31/1999 in Los Angeles CA tonight on Margaritaville TV. The show will be broadcast starting at 8:00 PM Eastern and again at 8:00 PM Pacific. The set list is available here along with some photos.

From Margaritaville.TV: This winter while Jimmy is off the road, we’ll be keeping the party going with a one-of-a-kind virtual tour of some of the most memorable and unique stops on this crazy carnival!

Tune in starting this Saturday at 9PM Eastern/8PM Central, when we will be re-broadcasting a show from the archives “live” like we would from a night on the tour! Be sure to watch, because when the show ends each Saturday night, it will go back into the vault.

Check out the full schedule below!

Also listen to the Key West setlist show and some other memorable show on SiriusXM’s Radio Margaritaville.

Jimmy Buffett is set to release his new album “Songs From St.Somewhere.” Experience EACH and EVERY song with Jimmy Buffett as he pilots us through his new album track-by-track, before its release! Only on SiriusXM’s Radio Margaritaville. 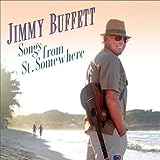 “Songs From St.Somewhere” is now available for pre-order at Amazon.com. Listen to samples of each of the songs at Amazon.com