Chat with other Parrotheads about dis and dat.

Dr.Corona
Chewin' on a Honeysuckle Vine
Posts: 6032
Joined: May 8, 2002 8:00 pm
Favorite Buffett Song: Apocalypso..no..Semi-True Story..no.Creola..no..REGGAE ACCIDENT!!
Number of Concerts: 6
Favorite Boat Drink: As if you HAD to ask!!
Location: The Great Lake State !

Welcome to Thursday August 8 BN'ers.
In 1786 the Congress established the US Monetary System. Oh happy day. No more trading animal pelts I guess. Question? How many bearskins to purchase two lawn seats to Great Woods to see Jimmy Buffett??

Final day of work for the good Dr for a week. Hoping I can make it an abbreviated one.
Enjoy your day Jones' Beachers & those planning for GW!!

Corona by day, Corona by night, any old time is just alright!

Good morning, Ken and BN. Hope everyone has a great day.

Good morning Ken, Debbie and anyone else who may wander in while I'm typing.

A couple of days ago the Chicago Cubs announced they were sending Ben Zobrist to the Pelicans on a rehab assignment. For anyone who doesn't know, he was the Most Valuable Player in the World Series when the Cubs won in 2016. He's here today through Saturday. The Pelicans have taken out a couple of electronic billboards around town publicizing Zobrist's appearance.

I already had a ticket to tomorrow's game because it's Augtoberfest and I'll get to sample some beers so I'll see a major leaguer play in the low minor leagues.
what I really mean . . . I wish you were here
Top

It's raining buckets here but I made it home before all the thunderstorms hit. Time to dig out the in box and catch up with work after being offline for several days.

You only have two options - havin' fun or freakin' out...

I just saw an article online that the Yankees and White Sox will play a game Aug. 13, 2020 at the "Field Of Dreams" in Iowa. They're going to build a temporary 8,000 seat ballpark for the game.
what I really mean . . . I wish you were here
Top

Does that mean Babe Ruth will walk out of the cornfield?
Top

I never saw the movie so I don't know what happens but I wonder if they'll invite Kevin Costner?
what I really mean . . . I wish you were here
Top

That would be a cool game.
Top

Back at the work place today after 5.5 days off.

Just got back from my walk in the park. It's 89 degrees and the heat index is 101, but I brought a bottle of water with me today.
what I really mean . . . I wish you were here
Top

bodypainter
Party at the End of the World
Posts: 8393
Joined: July 5, 2012 3:56 pm
Favorite Buffett Song: One Particular Harbor
Number of Concerts: 24
Favorite Boat Drink: whatever I get as a tip(no JELLO)
Location: Enterprise,PA

I have to work on signs for the town parade Saturday.
If I wasn't fishing in this all day rain,I'd be home doing something stupid.
Top

You only have two options - havin' fun or freakin' out...

It's hotter now than it was when I went for my walk this afternoon. It's 95 degrees.

It's done up here. The storm last night broke the humidity. We're wearing fleeces now, LOL, and we are in for a beautiful weekend.
You only have two options - havin' fun or freakin' out...

So - it's been a really long day, out at 8:30, back home at 5:00 with doctor appointments, waiting, lunch break, and a stop at THE brewery. Got to see some of our brewery 'family', and that was nice.

My checkbook will be happy. Thought I'd be out 3 weeks, and it'll be 6.

I can start gentle PT for my back, unless it really messes with my belly, for now.

I'm not a fan of either team but I'd love to go to the game just for the novelty of it. Plus, both teams have a Pelicans connection. Gleyber Torres on the Yankees played here in 2015-16 and Eloy Jimenez of the White Sox played here in 2016-17. When Torres was traded in '16 he was the #1 prospect in the Cubs organization. When Jimenez was traded in '17, he was the #1 prospect.
what I really mean . . . I wish you were here
Top

My checkbook will be happy. Thought I'd be out 3 weeks, and it'll be 6.

Great news, but don't overdo it when you get back to work.
what I really mean . . . I wish you were here
Top

Here's a 3-D rendering of the 'new' ballpark (the original field is on the far right); they will expect people to walk down a path from center field of the movie site to the 8000-seat park.  Looks like a set-up any class A or Double-A minor league team would be proud to call its own. 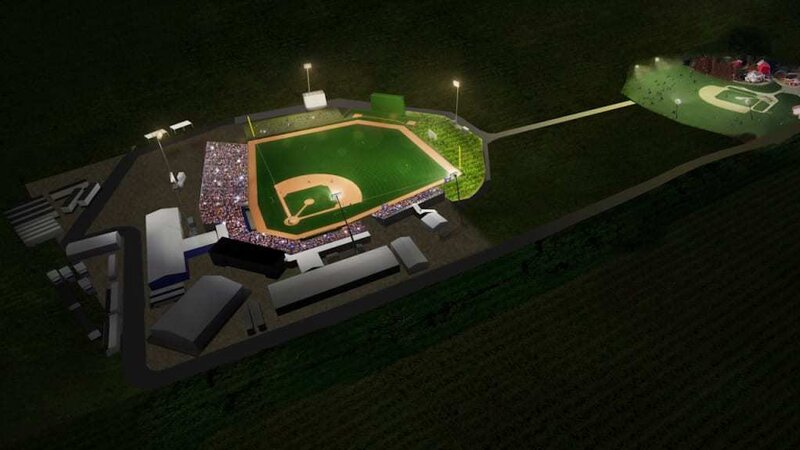 My only concern is the claim that this will be 'temporary'.  You really think they're going to put that in as a 'temporary' field, with all that supporting infrastructure like clubhouses, concession stands, grandstands, toilet facilities — all of which, of course, will have to be ADA compliant and handicap accessible — along with safety netting, lights, facilities for the media, and what-not, use it once, and then tear it all down again?  Not bloody likely.

I'm sorry to see this.  Maybe it's because my own father and I visited the Field back in 1989, when it was still sorta like it was in the movie — in fact, the owner of the adjacent farm whose land had been left field and part of center field, had plowed it back into corn, never imagining what was going to happen once the movie was released!

And yes, we had a catch.

Enjoyed a wonderful day at JB with wonderful BNers that I haven't seen in a while (and some that have tolerated me for the last few days, lol!)
Weather & show were both amazing. Upgraded to '3rd' row however the way they angled the rows, there was no one in front of me. Got Mac's set list