Earl Woods was a Green Beret, outspoken, and occasionally controversial.

But to Tiger Woods, he was simply "Pops."

Earl, along with his wife Tida, guided their son on the path to become perhaps the greatest player of all time. His role earned him a unique spot in golf history.

Earl Woods died Wednesday morning at his family home in Cypress, Calif., after a long bout with cancer. He was 74.

Woods and his father were close and competitive. He wrote that his childhood ambition was to beat Earl on the course. It was Earl who gave Tiger (named Eldrick at birth) his distinctive nickname after a South Vietnamese colonial he fought during the war. Perhaps the defining image of their relationship occurred in the 1997 Masters when Earl engulfed his son in a tearful hug just off the 18th green following Woods' record-setting victory.

"My dad was my best friend and greatest role model, and I will miss him deeply," Tiger Woods said in a statement on his Web site. "I wouldn't be where I am today without him, and I'm honored to continue his legacy of sharing and caring."

The beginning of Woods' journey started innocently enough in the family's garage. Already walking at 10 months, Woods watched Earl hit balls into a net. According to Earl, his young son picked up a club and began swinging left-handed, mirroring his father's actions.

Woods then did something that astounded his father. Moving to his natural right side, he instinctively changed his hands to form the proper grip.

"That's when I knew he was something special," Earl said.

It wasn't long before the secret was out. When he was 2, Woods took swings on the "Mike Douglas Show" to make what now has become historic video.

Earl guided the young prodigy's development. He invented games to keep Woods challenged. As Woods got older, Earl worked on his mental toughness by dropping keys or balls as his son began his back swing.

"I used every dirty trick I could think of," Earl said. "Through the use of guile and imagination, I always kept him wanting more."

Earl, though, always bristled at claims that he pushed his son into a strict, golf-only regimen, much like other overzealous parents of young athletes. According to those close to the family, it was just the other way around-Woods' parents insisting on school first and getting him to try out for other sports such as cross country.

"A lot of people say Earl was a pushy parent," said high school golf coach Don Crosby. "That's the furthest thing from the truth. Earl told me early on, 'I've been with him all summer. Once the high school season begins, he's yours.'"

"They used to compare me to Stefano Capriati (father of tennis star Jennifer Capriati) and I was totally insulted," Earl said. "People who know me know that I'm not remotely like that. It's an insult to my intelligence."

Earl, though, wasn't above raising some eyebrows with his bold predictions about his son. Unlike his son, who is quite guarded in interviews, Earl rarely minced words and didn't seem to care if anybody was offended.

After Woods turned professional in 1996 and then quickly won twice, Earl invoked the image of Gandhi when talking about his son's potential impact on the world.

"Tiger will do more than any other human in history to change the course of humanity," Earl said. "The world is going to taste his power."

In a later interview, Earl clarified his position. He contended that as a charismatic athlete, Woods would be in position to have an impact on humanity, much like Gandhi.

"I would like to have it stated that I did not say that," Earl said. "I consider myself a reasonably intelligent person. But I will say unequivocally that Earl Woods is not stupid to hang a moniker like that on his son-or anyone else."

Earl was instrumental as the driving force in the formation of the Tiger Woods Foundation. The organization recently opened a $25 million learning center in Anaheim.

Earl had a vast array of experiences before his son arrived on the scene. A catcher at Kansas State, he was the first black athlete to receive a scholarship in baseball from a Big 8 school.

Woods had three children from a first marriage. In an interview, he said he didn't see much of them.

Woods fought in Vietnam, doing tours with the Green Berets. While in Asia, he met his second wife, Tida, who was working in an Army office in Thailand.

Earl was 43 when Woods was born on Dec. 30, 1975. After Woods began his pro career, he remained married to Tida, although she lived in another residence. He called it a "marriage of affluence."

Earl decided to remain in the modest, middle-class house in Orange County, turning it into a shrine to his son with pictures covering the walls. Always thinking big, he said he hoped to turn the house into a national historic monument.
"Boat drinks, waitress we........nevermind"

One of Victoria's favorite stories about Tiger is in the "Thanks and Giving All Year Long" book which is a story about Tiger learning to love golf and hanging out with his dad.

She'll be so bummed for him.

We knew it was coming..... but I still have goosebumps! 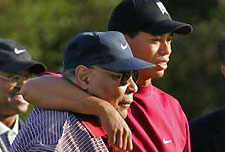 I hope to God everyone with two living parents appreciates them and TELLS them they're loved.

Sail on Earl....you did good
Top

That thread topic freaked me out. For a minute I thought Earl had been canceled.
Top

Jahfin wrote:That thread topic freaked me out. For a minute I thought Earl had been canceled.

Sail on Earl...
"And now you’re here and the search comes to an end... I’ve found my long lost friend."

"In all his deepest dreams the Gypsy flies with sweet Melissa..."

George Strait in June, Kenny Chesney in July, and Jimmy Buffett in August... Looks like a Great Summer!!!
Top

Sail on, Earl.
Carry on as you know they would want you to do. ~~JB, dedication to Tim Russert

ToplessRideFL wrote:We knew it was coming..... but I still have goosebumps!

I've been banned from my own site

A truly devoted father.... sail on

Sail on Earl. Thanks for guiding your son to be a good person in addition to being a golfer.

(((Tiger)))...on losing your best friend.
"Reading departure signs in some big airport reminds me of the places I've been"

Blue skies, sir.
See you at the rally point.
“Give me a woman who loves beer and I will conquer the world.”
- Kaiser Welhelm

"The call is a loud wulli-wulli, and there is much twittering at the drinking holes."
Top

This is indeed a horrible loss. Earl Woods was a great father who raised a son to not only be a terrific athlete, but Earl always commented that Tiger was raised to be a good person.

I think it may be a little late for that.
Top